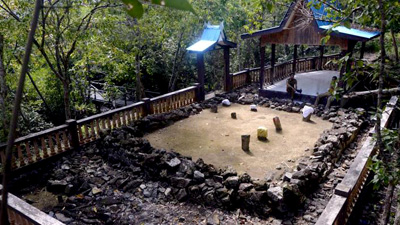 In Anambas Regency, Siantan Island becomes the best site to find good accommodations and tourist attractions. For example, there is Siantan’s Ancient Tomb located in Teluk Siantan Village, Central Siantan Sub-District. Due to its sacredness and mystery, both locals and tourists take advantage of the site to conduct a pilgrimage tour. These people usually come during Ramadan, where the nuance is more serene and sacred. The good thing is that tourists can visit the tomb regardless of the time, including in the morning and at night. Also, it is free! However, it is rare to find visitors at night due to the dark and creepy ambiance in the evening.

The Nuance
Siantan’s Ancient Tomb resides in the middle of a forest. No wonder, it is not recommended to come to the site at night. Instead, coming in the morning or at noon becomes a good idea due to the presence of beautiful scenery of nature. Even lots of mangroves grow on both sides of the road, on the way to the location. Once arriving at the site, tourists might find 8 headstones! One of them belongs to “Nahkoda Alang” but the others have no name at all. Also, a big “Pendopo” resides there, including a charity box.

Exploring Siantan’s Ancient Tomb
Once arriving at the site, tourists might see several structures (similar to a house) which they can use for praying. Have no worries. The atmosphere is both peaceful and cool due to the presence of mangroves that surround the site. During the visit, make sure to take care of the environment well. That means visitors are not allowed to litter or cause too much noise there. It is also recommended to wear neat clothes when entering the site.

For first-timers, it is better to come with a local guide. Why is that? This person can help them regarding the route and history of the tomb. Despite the unconfirmed information, one of the tombs belongs to Nahkoda Alang. It is said he was the right hand of Datuk Kaye of Johor Kingdom. Not to mention he was a brave commander of the kingdom. According to the locals, he died during the war against Dadri Army. Due to his bravery, the King decided to bury him in a big and sacred location (which is in Siantan).

Those who come to Siantan’s Ancient Tomb usually want to give a prayer either for the deceased or for their own fortune. It is because they believe that the tomb brings luck to their future. Even though not all tourists believe in such kind of thing, most locals come to the site for that reasons.

How to Get There
For those coming from Letung, they need to head to Siantan first by boat. Once arriving at Sri Lakang Port, they can take local transportation service and head to the site right away. However, the trip involves a short trekking (passing through a mangrove forest). What they need to do is to follow the wooden path that leads to the tomb.