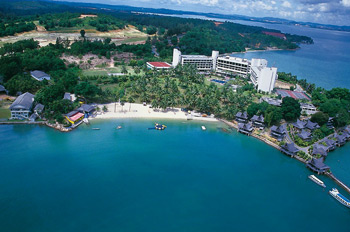 Batam is one of the 3,000 islands, which make up the Riau Archipelago and is closest to Singapore, which is only 20 km away or twenty minutes by air-conditioned ferry. It has a rapid-growing population of around 100.000. As the island develops into a major industrial and tourist area, it attracts an ever-increasing population from other Indonesian islands who see Batam as a haven of opportunity. Once almost uninhabited, save for a few scattered fishing communities, Batam's history took a sharp turn beginning 1969, when it became support base for the State-owned 'Pertamina oil company' and its offshore oil exploration. In 1971 a presidential decree designated it as an industrial area and in 1975 the Batam Authority was formed. In 1978 Batam was established as a bonded area.

In addition to the oil support industries of Batu Ampar and a fast growing electronics industry, Batam now attracts increasing numbers of tourists. Many come from Singapore for a short holiday with friends and family, duty-free shopping and great seafood. The visitors to Singapore hope over for a day or weekend trip.

International standard hotels and numerous economy establishments cater to the expanding demand for accommodation. Business, as they say, is booming. An island two-thirds the size of Singapore, Batam progresses by leaps and bounds. Where virgin jungle once stood are now whole new towns, mosques, churches, temples and supermarkets, soon to be followed by reservoirs with enough water to supply a population of 800,000 and for industrial use, an airport-to become an international gateway - a fine telecommunication system, well equipped industrial parks, and the beginnings of a large new urban center.